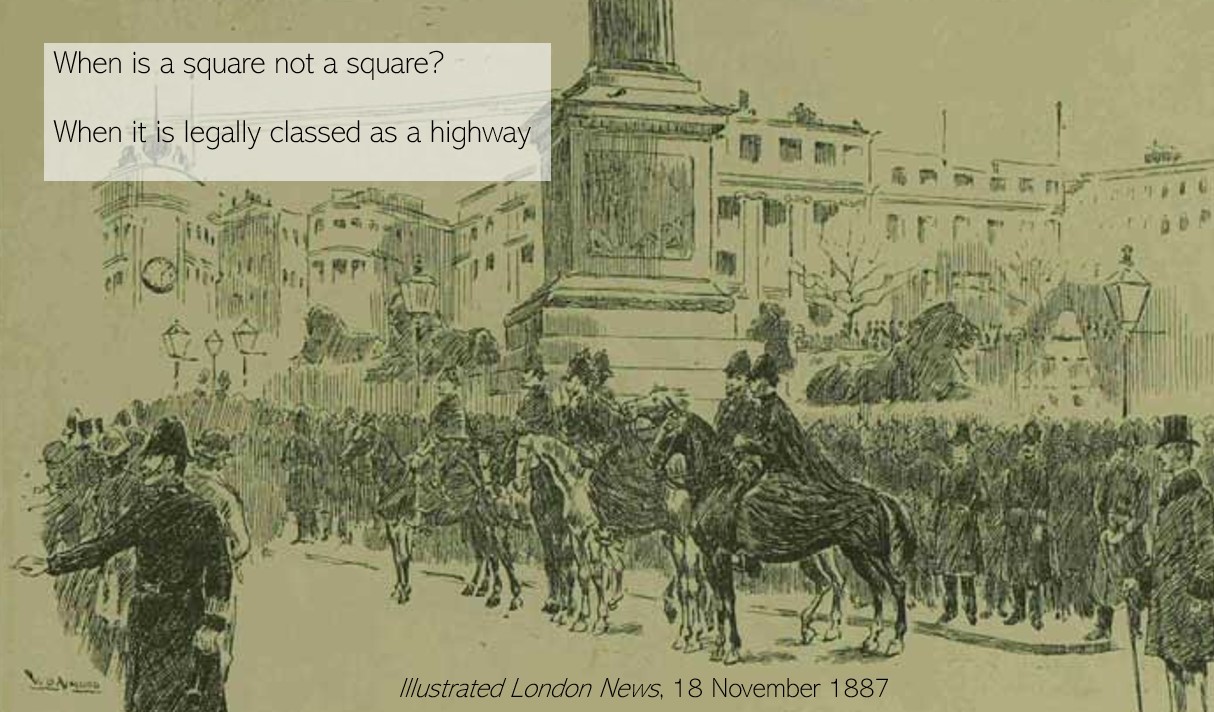 On 5 February 2021, I was honoured to give a lecture to the Royal Historical Society, on the history of the right of public meeting. It has been recorded and will be posted on their website soon. https://royalhistsoc.org/events/

Ironically the lecture came the day after a video of Handforth Parish Council went viral on Twitter and other social media. My choice of Isaac Cruikshank’s 1828 cartoon of a select vestry meeting being interrupted seemed especially relevant: 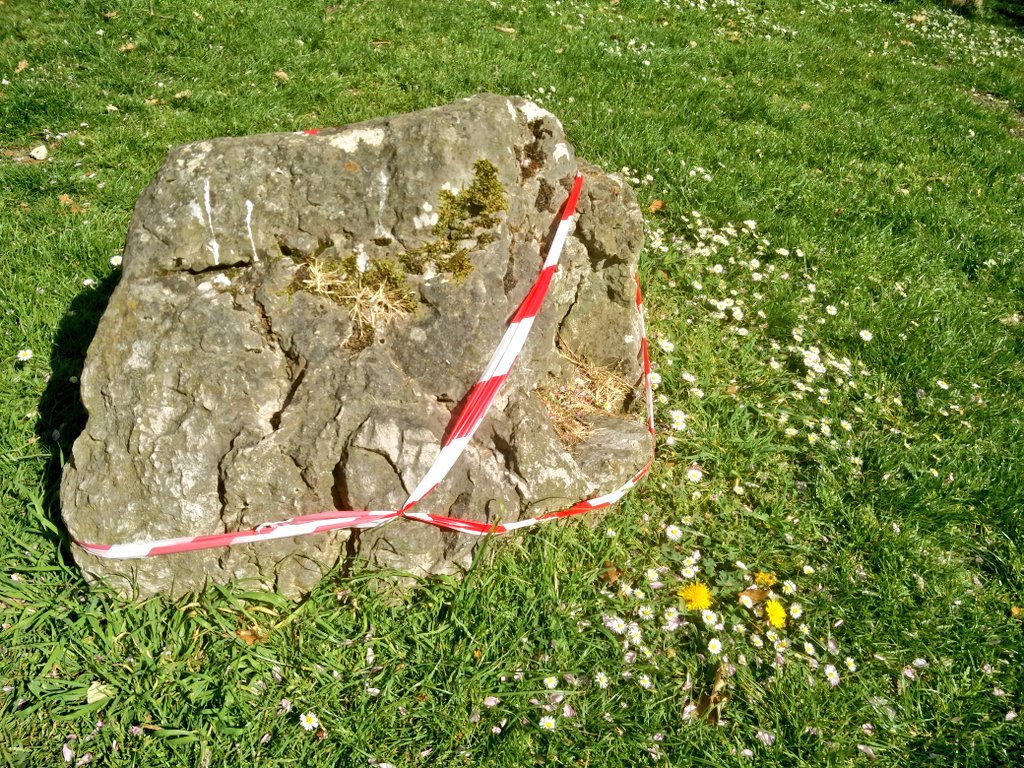 Here are some brief reflections on what lockdown has highlighted about public space.

The first few weeks of lockdown were characterised by confusion – how does the virus spread? does it stay on surfaces and for how long? Is being outdoors more dangerous than indoors?

In those early weeks the focus was on spread through touching surfaces. So we saw odd scenes like every potential spot that could be construed as a seat being taped off. These images of the stones in Kennington Park, which I know well, taken by Will Jennings, are perhaps the most representative of this sense of panic of the unknown:

At the same time, government guidance delineated what activities were and were not permitted in public parks and other open spaces. So while exercise, including yoga, was allowed, sitting and sunbathing was not. So we had the unnerving sight in some areas of police patrolling through parks and telling sunbathers off. However seemingly random previous parks’ byelaws had been in the Victorian era (everyone seems to cite the ‘no beating carpets and rugs’ byelaw), this rule really felt like an inversion of all normal order, a world-turned-upside down.

Driving to outdoor spaces was also initially prohibited by government guidance, the ban not lifted until mid May. The National Trust closed its carparks and properties to prevent people accessing its outdoor spaces. Another of the now notorious images of the early lockdown period were of Derbyshire police using drones to spot people who had ignored the guidance to go walking out in the countryside.

The other notorious image, which has quickly become a twitter meme, is this one of a police megaphone shouting at a woman walking:

By June, the impact of devolution began to surface, with each devolved government setting its own parameters for restrictions and quarantines, which is still creating inconsistencies and public confusion currently (September).

Throughout this period, the issue of public rights of way and access to the countryside have been heightened, not least by informal and unofficial closures of ROW and signs made by farmers and landowners wishing to protect their livestock and workers.

This produced a whole genre of covid signs, such as this one spotted by Dr Claire Hickman:

The Viral Archive on Twitter has been collecting similar signs and writing/markings on urban open spaces:

See Miles’s blog posts at the time about ‘performing lockdown’ in open spaces:

Once lockdown eased, it also became evident that people were using public open spaces in different ways. Or at least because people were ‘staycationing’ instead of going abroad, they were using their local parks and beauty spots at different times than usual and thus noticing alternative uses by people they would not normally come into contact with:

Raves returned to the countryside as young people felt frustrated not to be able to socialise in clubs:

It very soon became evident that lockdown restrictions highlighted and indeed exacerbated the spatial inequalities of race and class in Britain. Lack of access to private gardens and to public parks was most acute in the most deprived urban areas. The debates over whether public parks should be closed hinged on the issue of how gentrification of parts of London meant that working people, especially of colour, were predominantly those suffering lack of access to open space. And with links being quickly made between pollution and covid deaths, most severely affecting deprived areas, this connection was underlined even further.

As lockdown lifted, and the government encouraged us to ‘eat out to help out’, the urban street space changed rapidly and pretty dramatically. Local councils enabled temporary pedestrianisation and street licences allowing cafes and restaurants to have outdoor seating on previously busy roads. In the continued hot summer, there was a brief vision of the ‘continental cafe culture’ that has always been an aim of successive regeneration schemes but never achieved on this scale in practice.

But it came with problems, with concerns about the West End of London being so packed that social distancing was impossible on ‘Super Saturday’ in early July after the pubs reopened:

The implementation of social distancing measures also saw the morphology of streets change in densely populated areas, most physically with the replacing of car lanes with pedestrian routes and cycle paths on some large roads.

Low Traffic Neighbourhoods, a key demand of the ‘living streets’ movement were also temporarily trialled in some London boroughs.

The Open Spaces Society provide a useful summary of the various changes made to both legislation and government guidance related to use of open spaces:

The right of public assembly

Legal scholars have pointed out the barrage of emergency legislation that has been passed without full parliamentary scrutiny over lockdown, and that much involves restrictions on public gatherings. The increasing vagaries and contradictions inherent involve, as much legislation about gatherings has historically, a series of numbers – 1 household, 1 ‘bubble’, 30 people, now the ‘rule of 6’.

As Black Lives Matter and later X-tinction Rebellion protests tried to navigate the restrictions and assert their right to protest, and more illegally as large groups held raves in the countryside, inevitable parallels were made with the passing of the Public Order Acts in 1986 and 1994:

Wagner also points out the ambiguities inherent in the legislation’s use of the word ‘mingling’, the first occurrence of such a term in English & Welsh legislation:

Some legal scholars argue that the government’s ambiguity between regulations, legislation and guidance has exacerbated the situation. See for example Tom Hickman’s paper, ‘The Use and Misuse of Guidance during the UK’s Coronavirus Lockdown’: https://papers.ssrn.com/sol3/papers.cfm?abstract_id=3686857 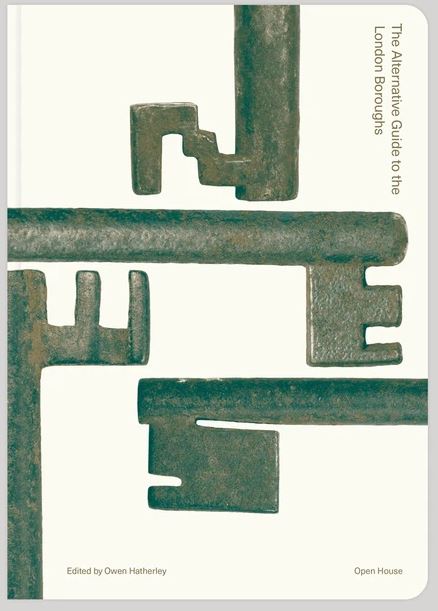 Given that most of the Open House activities can’t take place in person this year (weekend of 19-20 September 2020), this alternative guide provides a brilliant variety of approaches, insights and takes on what it’s really like to live in the material space and architecture of London.

I was honoured to be asked to write the Croydon entry, with a focus on public space.

It is my first published writing on the borough, and stems from some of the research I’ve been doing for the project that this website is showcasing.

I conclude that the 1950s and 60s redevelopment of Croydon in favour of office accommodation and roads severely diminished the availability or amenity of central open public or civic space in the town centre, a problem that has not been fully remedied by pedestrianisation.

I also point out the current fashion among the big developers redeveloping Croydon again for calling the open spaces between the new massive towers as ‘town squares’. Squares are back, but they are privately owned and controlled, and I doubt will form a communal space for either residents or the general public.

But I also praise the range and extent of green spaces in and around Croydon, and hope they are retained in the face of current rezoning and redesignation of land use under the various plans.

I love Open House London. It’s genuinely one of the highlights of the year, marking the end of summer and the start of the new academic year. A final mosey round new places and familiar sites, often in an Indian summer in the last rays of warm sun before it goes cold and dark for the rest of the year.

I’ve seen some great buildings (notably the Isokon and Pullman Court art deco buildings in Belsize Park and Streatham respectively), been shown round wonderful housing schemes by local residents (Cressingham Gardens, Golden Lane, also the Walter Segal self-builds in Lewisham) and got into the most delightful spaces on my doorstep (St Bernard’s estate in Park Hill, Croydon).

There are virtual tours and some activities going ahead 19-20 September, and I very much hope everything returns bigger and better next year. 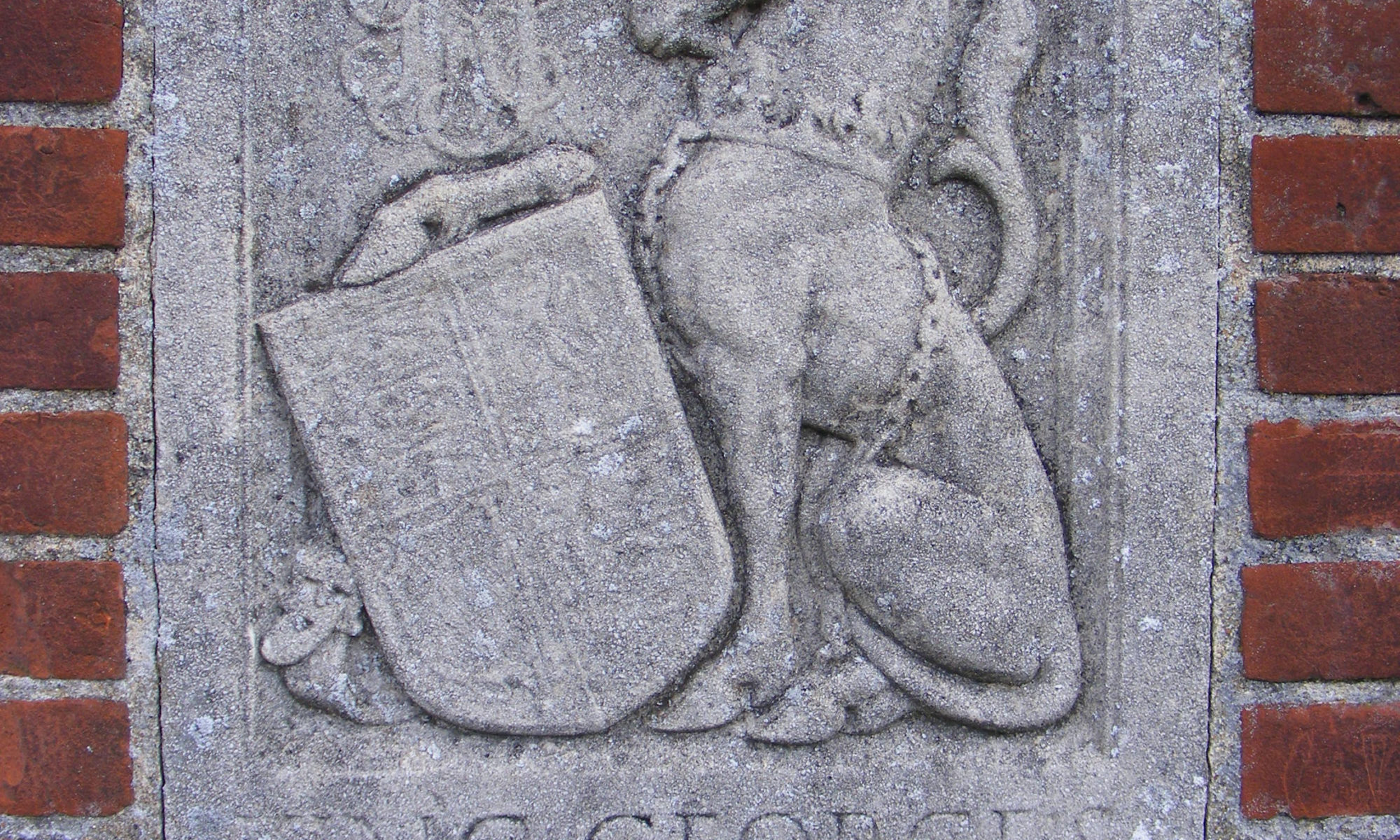 In the early 20th century, planners and societies like the NPFA were obsessed with a minimum standard acreage per 1000 people (the aim was 4 acres).
By the 1960s, the association realised this was too crude a measure that did not take into account the inequalities of access

the general secretary at that time (1960) even mooted that the only solution was legislation governing the price of land and permitting compensation from central government funds to landowners.
For why land reform failed, see Michael Tichelar, https://t.co/3w7bG4FpCm 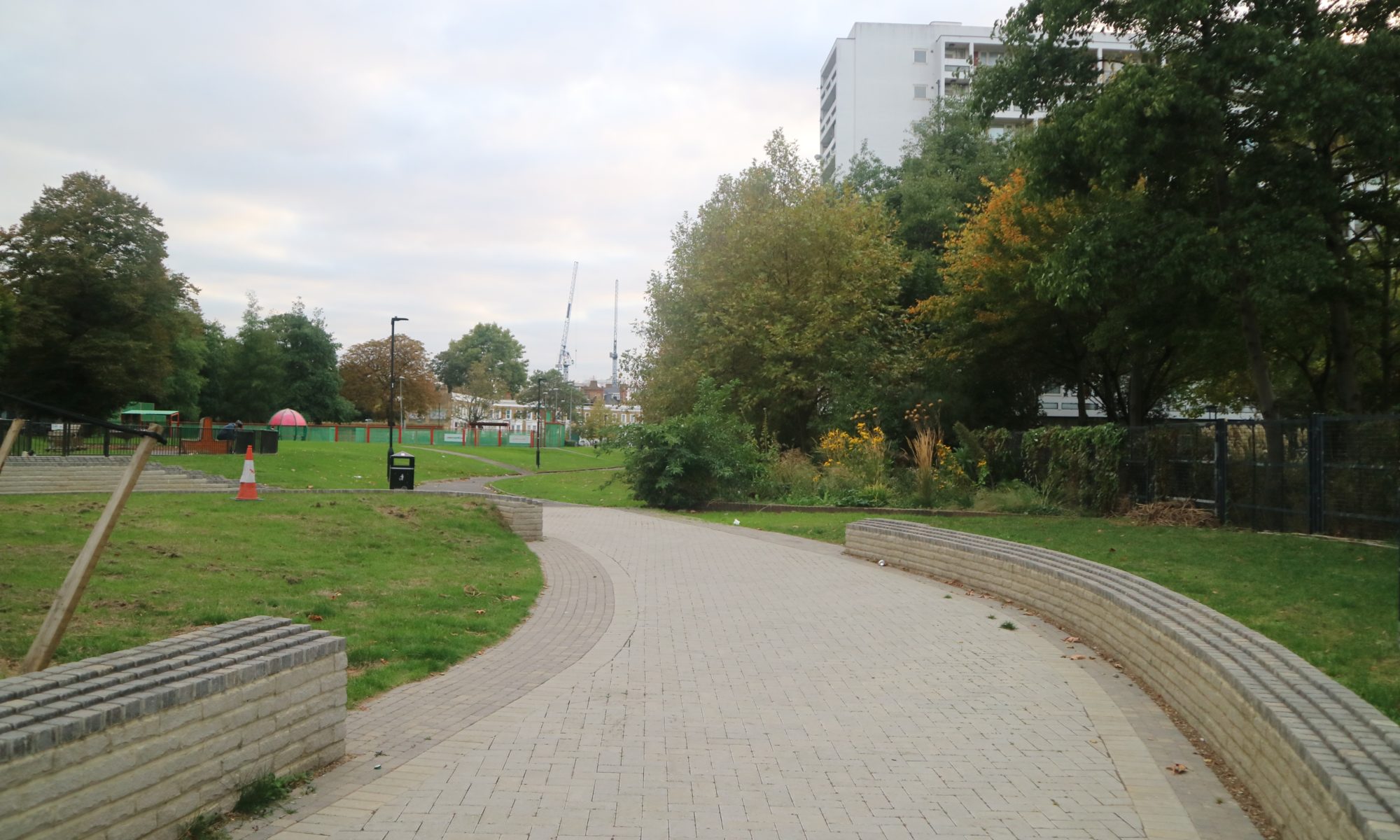