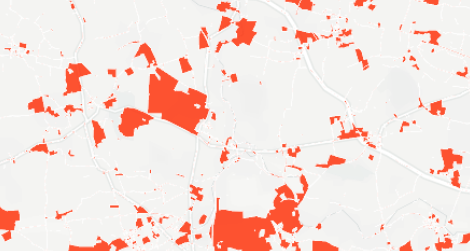 As you may know, this project is very much inspired by the great project Who Owns England? led by Guy Shrubsole and a team of researchers, sending in FOI applications and scraping maps to campaign for more transparency in land registration.

The data lead Anna Powell-Smith has charted in their latest blog post study the amount of land is still unregistered in England – 15%. https://whoownsengland.org/2019/01/11/the-holes-in-the-map-englands-unregistered-land/

Twitter comments have noted how some of the 15% area is railway lines – Network Rail apparently haven’t registered their land, or land that has remained in the same hands and unmortgaged since 1990.

Remarkably, we don’t know who owns 15% of the country.

I think this should be better understood, so I’ve made the first ever map of unregistered land in England & Wales. Check out your area…https://t.co/jxrQGfz19g pic.twitter.com/6qhfV9MscG— Anna Powell-Smith (@darkgreener) January 11, 2019

I’m very much looking forward to Guy Shrubsole’s book, Who Owns England? out in the spring: https://www.harpercollins.co.uk/9780008321673/who-owns-england/