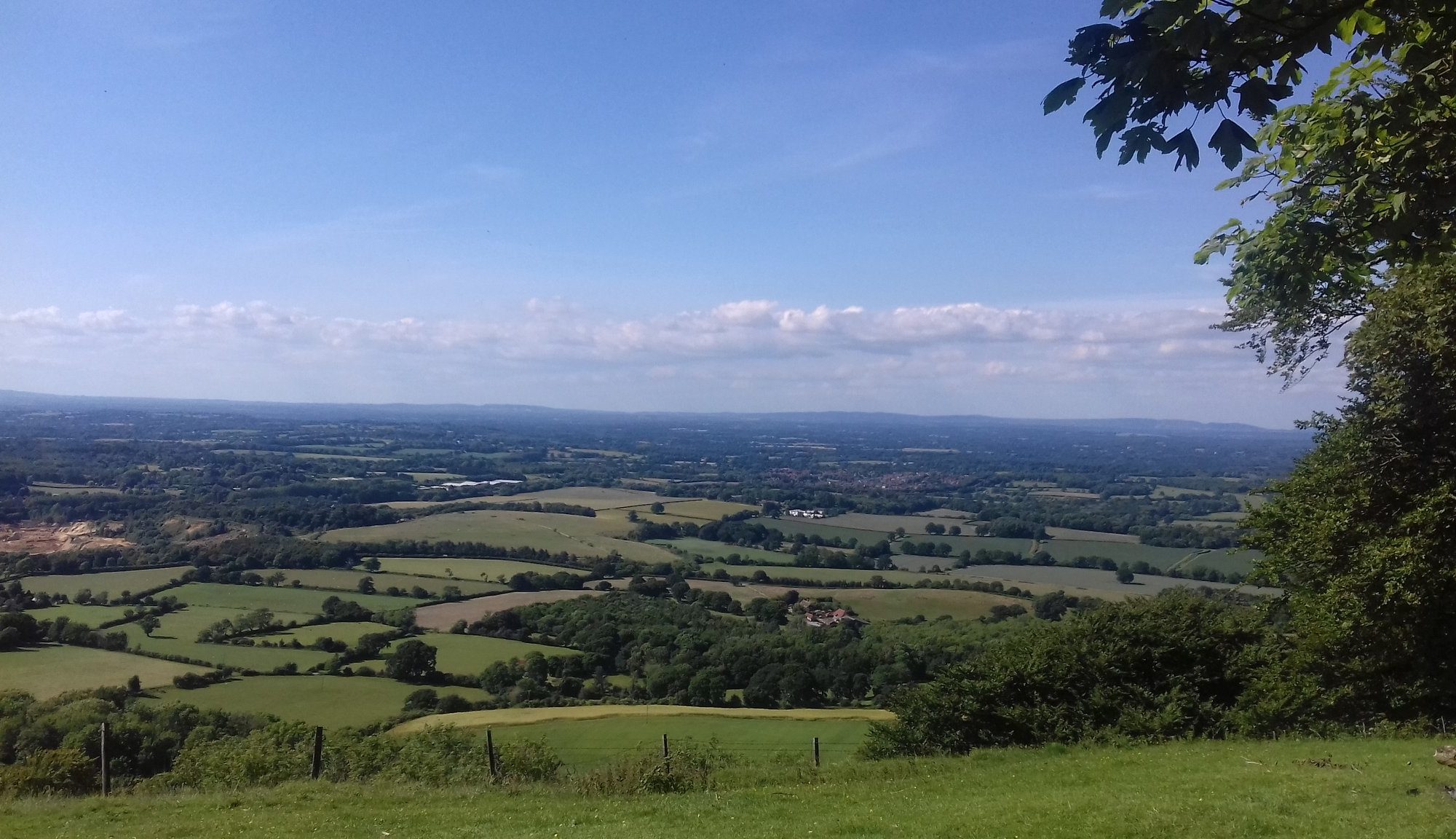 I am an upland person. I grew up surrounded on three sides by the foothills of the southern Pennines. I am shaped by views of Blackstone Edge, its dark millstone grit, from afar and up close, approaching it from the ‘Roman Road’ packhorse trail.

I do not get that longing that many people have to be by the sea. The sea scares me. I find lowlands, particularly fens and estuaries, disquieting. Flatlands, where a building or a tree blocks a whole view. Hills, in the near distance, are comforting. The horizon, and the promise of a climb to a good vantage point to survey the landscape. A trig point.

In an earlier blogpost I quoted from Ted Hughes,

“You could not escape the moors. They did not impose themselves. They simply surrounded and waited. … And however rarely you climbed to investigate them in detail, they hung over you at all times. They were simply a part of everything you saw. Whether you looked east, west, north or south, the earth was held down by that fine line of moor…”

That’s exactly what it is like, albeit from the ‘right’ side of the Pennines in Rochdale rather than from Hughes’ Calderdale perspective.

My article on the public enquiries into the Super Grid pylons from Blackstone Edge to Belmont Moor in the 1950s similarly unpicks some of the relationship residents of south-east Lancashire have with the Pennines. Even though they are often bleak, scarred by mining or quarrying, devoid of trees or even of much ecological diversity (thanks to aristocratic grouse-moors), and though many parts are still out of reach for ramblers (thanks again grouse-moors and the military), residents nevertheless still feel part of the landscape. They see the views as amenities in themselves.

I am northern, and this is my landscape. But something draws me to southern downlands and chalklands. The southern English dominance of perceptions of landscape in writing (thanks Thomas Hardy) and art reifies these landscapes the most: the undulating grassy knolls of downland, the white chalk brightly in relief against a summer sky. It is a land of ridgeways, ancient tracks, long barrows and iron age hill forts, tors and white horses, druids and Romans. A land of morris men, green men, harvest customs and folksong. All the features that Victorian antiquarians and archaeologists revelled in uncovering and dissecting. It is southern.

“This landscape remembers. It remembers every footfall and wheelrow, and bears each of these as lines, on its face.”

This could be a quote from C. L. Nolan, antiquarian recorder of Hookland. But it is a line from ‘Chanctonbury Rings’ by Justin Hopper, the prose-poem/piece that he narrates about the iron age hill fort on the south Downs in West Sussex, accompanied by music by Sharron Kraus and the Belbury Poly (Ghost Box Records, 2019).

We saw Hopper and Kraus perform the album at state51 Conspiracy and Ghost Box’s ‘midsummer night’s happening’ on 21 June. It was a little incongruous, as it took place in state51 conspiracy’s performance space in an old industrial building in Shoreditch, which though they did their best to create a magical Pan-like world inside the hall, was as far as you could be from a chalkland ridgeway.

The next day, therefore, we felt drawn to Chanctonbury Ring itself. It was a perfect midsummer’s day, hot with a sharp long sun and bright blue cloudless sky.

There is genuinely something magical or mystical about such sites. Just the knowledge of walking along thousand-year old paths, sitting by ancient long barrows, trying to trace the patterns in the fields created by ancient people. I felt it here. I felt it on Uffington Castle hill, walking the Ridgeway there and at Tring. I felt it on Glastonbury Tor. Walking past Silbury Hill to Avebury.

And I say this not from a national or patriotic perspective. The false nostalgia of ‘good old England’ is something in particular that #landscapepunk and folkhorror writers and artists are trying to challenge in their work. See David Southwell’s pronouncements on why he does what he does through Hookland. There was a debate about this in relation to some writing about English landscapes done a couple of years ago that I won’t go into, but I am on the same lines as the landscape punk writers. (see also https://ayearinthecountry.co.uk/the-old-weird-albion-and-eighth-climate-spectres-of-myths-and-psychogeographic-explorations-wanderings-explorations-and-signposts-3852/)

The landscape is meant to be unsettling; it records conflict and unrest and unease and longer ways that we do not, and should not, understand. It is not blood and soil in the father-land sense of the term. It is not reassuring; it challenges us. And from my perspective, it is regional.

Nevertheless, it was still stunningly beautiful.

I am thinking a lot about the regionality of landscape, not least because I am sorting through the common rights claimed by the various counties in enclosure cases and the registration documents for the 1965 Commons Registration Act (see previous blog post). The rights claimed were for subsistence and farming, and reflected the materiality of the regional landscape: chalk cut from pits in chalkland, and gorse, bracken and fern cut in September were key here. Whereas in the Pennines, turbury (peat cutting) was a main feature of the local customary economy, increasingly stretched as the population and urban settlements grew on the edges of the hills. Was there a ‘moral ecology’ at work here? (see the influence of Karl Jacoby in developing the term, e.g. in the work of Iain Robertson on Scottish crofting landscapes – see his article with Carl Griffin also on Gloucestershire: https://academic.oup.com/hwj/article-abstract/82/1/24/2499401) Or was it just subsistence, with over-grazing and over-stocking of animals on commons suggesting simply an increasingly pressured means of survival rather than concern for the environment?

Differing customary traditions also mark regionality of landscapes. And what tradition is should not be overthought. Hopper, again echoing Nolan I think, notes about encountering morris men on 1 May:

“They stepped in the same patterns as bearded men had stepped a century before them, maybe in the same place. Morris won’t make the rains or the harvest come; no child will flourish because of this dance; God knows fertility won’t be enhanced. It is a checkpoint, a diary entry, written onto the earth at Chanctonbury, with footsteps, like lines accrued on a face. That, that is tradition. That it is sole purpose, to be enacted, and ever so.”

As for access, Chanctonbury is part of the South Downs National Park but is still owned by the Goring Estate, who have been major landowners in the region for centuries. Up to 75% of the trees planted on the Ring in the 18th century were felled by the Great Storm of 1987, a feature that Hopper relates on his album, reflecting on the ‘ghost trees’ he now remembers there.