The ancient rights of man, woman, hog and ghost are kept on the many commons of the county. pic.twitter.com/118FVq9zB8

A major part of this project is on the long history of commons and enclosure. I’ve not started working on new research yet as I’ve mainly been looking at post-enclosure spaces such as parks this autumn, but it is on the horizon for the New Year. Hookland’s appeal to the age-old customary rights inherent in common land is a reminder of the mythical and folkloric power of such spaces.

But the history of commons have an urgent connection to current concerns about access to green space, landownership and its uses.

I was honoured to be part of an event on 15 November called ‘commons’, organised by the Whitechapel Gallery and hosted by Manchester School of Art.

I was intrigued by Chris Blake’s talk on the community project he’s involved with in the Rhondda Valley, The Green Valleys Skyline project, which seeks to rekindle the idea of ‘stewardship’ of the hillside enveloping the former mining town of Treherbert. https://skyline.wales/community/treherbert

The landscape, formerly owned by the National Coal Board and now owned by various bodies including the Forestry Commission, is a constant site of work, rethinks the meaning of ‘taskscape’ in that it has been mined and forested for commercial gain, and the livelihoods of the residents, but the residents did not and do not have access or use of it. It is also near Aberfan, and thus a site of catastrophic loss. Using art, the project seeks to get the residents to think big, beyond the immediate horizon and look upwards to the possibilities of reasserting some kind of custodyship over the natural resources in a sustainable way.

Artist Ruth Beale has been working on drone footage of the London parks and commons, many of which I tried to recognise in her short film (including flying her drone over Tooting Bec Lido, which I think I remember while swimming there this summer!). http://ruthbeale.net/work/commons-drones-gifs/

She has also made art using registration archives from the Commons Registration Act of 1965, in Nottinghamshire Record Office. These are my sort of archives and I will be examining similar returns in my research. They detail the surviving common rights that people claimed to have when registering their commons and village greens in response to the legislation.

Here are my slides of my talk. I was asked to do a potted history of commons and enclosure in England. It start with a summary of one of my earlier blog posts on this site:


Campaign groups and the issue of public green space today

I’ve also been approached by several groups campaigning for the preservation of their local open spaces. This is so much more than simply nimby attitudes against building of houses on open spaces. At Manchester I met several of them. The Save Ryebank Fields have a decades-old campaign running about their local space. http://www.saveryebankfields.org

I am going to be collaborating with them to use their archive for my forthcoming exhibition at the People’s History Museum next summer.

I also met someone from the Freeman’s Wood campaign conducted a few years ago in Lancaster.  http://www.storeyg2.org.uk/ 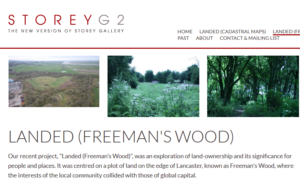 In Sheffield, I met with people from the Centre for Regional Economic and Social Research at Sheffield Hallam University, and Nicola Dempsey of the University of Sheffield to discuss all the issues around green spaces and community groups in the city. I found out how save the trees campaign seems to have skewed the broader issues of the responsibilities of the council and consultation regarding open spaces.

If you know of any more similar groups campaigning for their open spaces, especially if they have their own archive material or if they would like to be interviewed or have a link on this site, do get in touch.

I’ll leave you with Hookland’s imagining of the common: