I’ve been ruminating on a relatively recent issue of Environment and Planning A (49: 3, 2017), which outlines and challenges the debate in geography and sociology about the ‘end of public space’.

Don Mitchell’s article revisiting his previous work about People’s Park, CA is perhaps the most strident in the issue to argue against the prevailing acceptance that privatisation has killed off urban public space. There’s a kernel of ‘mea culpa’ in his reflection on the impact of his original 1995 study of the riots in People’s Park of 1991, and other riots of that era such as in LA in 1992 (Mitchell, 1995). This study was part of a range of geographical and sociological works proclaiming the ‘end of public space’ in the 1990s. 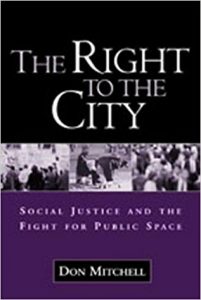 Before this period, contemporary studies of public space had not been so pessimistic. Oscar Newman’s 1970s polemic about ‘defensible space’, though influential in architecture, stood alone in its critique of hostile architecture. Yet from the 1990s onwards, volumes of material has been produced on privatisation of public space: private policing, anti-homeless spikes and benches, Business Improvement Districts and ‘pseudopublic’ ‘malls without walls’.

At the same time, sociological studies of popular protest were identifying a shift in policing tactics, from the 1960s tactic of ‘escalation of force’ (i.e. beating protesters up) to ‘negotiated management’. Police were increasingly enabled by two frameworks governing public space: new legislation governing rights to assembly and speech, and local authorities zoning space for (peaceful) protest. In turn, they moved to negotiation with protest organisers over the form of protest: ‘Both strategies eventually reworked the relationship between public space and politics, emphasising public space as a space of control, limits and again order’ (Staeheli and Mitchell, 2008; Mitchell, 2017, 506).

Mitchell identifies the two key books that started this trend in the 1990s towards a critique of the privatisation of public space: 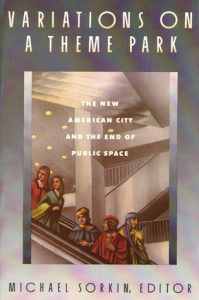 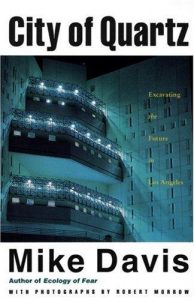 Davis argued that private encroachment by capital into the public realm was remaking the city as a violent frontier of capital accumulation (Mitchell, 2017, 504). Sorkin posited gentrification as a process that turned urban space into Disney World style commodification.

The image [of public space before privatisation] seems to be one of open or relatively open access, of little capital control over the full functioning of the space, of light policing. Public space is primarily defined by what it is not: private space. The end of private space in the American city is its privatisation. (Mitchell, 2017, 504).

Mitchell’s focus is on the US, where much of this early literature originated. In the UK, the theoretical literature on private-public spaces has come a little later (though I need to do more research on this), and has been publicised even more recently in the press by the work of Owen Hatherley and Anna Minton, and to some extent, the Guardian’s ‘Cities’ section.

Where Mitchell disagrees with this literature now is that it assumes that the process ‘from above’ is a given. At the very point in the 1990s when it seemed that privatisation was closing down all avenues for expression, in fact the emergence of ‘new social movements’ and the ‘invention of new modes of urban sociability’ reworked the meanings and userships of public spaces. Mitchell argues that public spaces are still evolving and continue to be challenged and used in different ways.

Florian Langstraat and Rianne Van Melik have already participated in this critique of the ‘end of public space’ thesis in a 2013 article. They also challenge Sorkin’s ‘rather bleak picture of modern life … characterised by social exclusion, sanitised consumerism and restrictive security measures’ (Langstraat and Van Melik, 2013, 429).

They group their main objections to the thesis into three points:

Drawing from Paddison and Sharp’s study of two neighbourhoods in Glasgow (2007), they argue in particular that most public space is not located in the city centre, and is therefore not as well known, and ‘processes such as privatisation might work out differently in these ‘banal’ spaces’ (Langstraat and Van Melik, 2013, 432).

I think perhaps they go a little too far in swinging the pendulum the other way – their argument ‘such claims [about the privatisation of public space] should only be made, if at all, for a very limited number of newly regenerated inner city areas (Langstraat and Van Melik, 2013, 432)’. The work of Minton and others on pseudo-public spaces has shown how the process is dominant in most city centres in the UK and USA, although I accept their (and Mitchell’s) challenge to examine these sites in new ways, looking at how the public uses such spaces in practice, ‘reinventing new forms of urban sociability’. But their pointing to the ‘banal’ spaces of suburbs (and by extension, rural spaces?) is promising, and something I definitely want to investigate.